Alex Prine is the Assistant Supervisor for Visually Impaired Advancement (VIA)’s switchboard operations at the Buffalo VA. Like many employees of VIA, Alex is visually impaired. He was born with Leber’s Hereditary Optic Neuropathy, which affects the optic nerves connecting the eyes to the brain.

Alex discovered VIA in 2019, then known as Olmsted Center for Sight when it was suggested to him by a mentor to look for employment through the organization. Before being accepted for a switchboard position, he began his career with VIA as a Quality Assurance Tester.

After a brief time, Alex was promoted to Assistant Supervisor, where his duties now include compiling on-call schedules, managing databases, and providing administrative support.

This year, in recognition of his work, he was nominated for the Peter J. Salmon Employee of the Year Award from National Industries for the Blind (NIB). The award, which honors employees who excel in their positions at NIB-associated agencies, is named for the late Dr. Peter J. Salmon, who was instrumental in the passage of the Wagner O-Day Act and the formation of NIB.

“Since joining the switchboard, Alex has been a tremendous addition to our team,” says Gary Wagner, Director of VA Contracts and Public Policy. “He has brought a positive work attitude and ethic to the office.” In addition to his work ethic, Gary states that Alex is constantly looking for opportunities to improve efficiencies, as well as accessibility and usability for his blind and visually impaired peers. 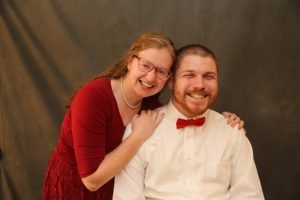 Alex said he is grateful for the nomination in recognition of his hard work, dedication, and the ability for people who are blind to succeed.

“Work hard, stay positive, and try to be as independent as possible, because there are opportunities, personally and professionally, both in and outside of VIA, if you look for them.”

VIA is an equal opportunity employer! At VIA, you can grow your career and make a positive difference in the lives of others.