Nick Hlifka was born with Leber’s disease, sometimes known as Leber Heredity Optic Neuropathy (LHON), and ocular albinism, which has left him with only light perception in his vision.

“I wouldn’t see it if you held your hand in front of my face,” he said. 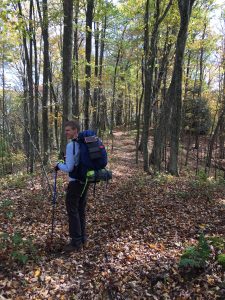 While he navigates his world without sight, he is thankful to have grown up with his visual impairment and learned along the way, rather than going through the sometimes-tricky process of relearning tasks later in life. Nick has never let his visual impairment get in his way. Living in North Carolina, Nick is an avid hiker, going on 15-mile treks in a single day.

Nick is an employee for Visually Impaired Advancement (VIA), working as an Information and Referral Specialist II at VIA’s contact center (211 Western New York).

“I take calls from community members throughout the day, and we try to point them in the right direction as far as resources that might meet their needs,” said Nick.

As a JAWS (Job Access with Speech) user, Nick also helps other employees with visual impairments navigate and use assistive tech. VIA and Nick share a goal of helping VIA’s staff maintain employment and access to assistive tech.

“I think we’ve all realized during these difficult times how many people are without work still,” he said. “You add visual impairment, and it adds a whole extra layer to it.”

In 2021, VIA nominated Nick for the National Industries for the Blind (NIB) Peter J. Salmon Employee of the Year Award. NIB’s board of directors created the Peter J. Salmon Award in 1968 to honor the accomplishments of employees who are blind working at NIB associated agencies who excel in their positions.

“I’ve just found from a young age to put my all into whatever I am doing,” he said. “I just come to work every day and give it my all, and I appreciate that that’s recognized.”

VIA is an equal opportunity employer! At VIA, you can grow your career and make a positive difference in the lives of others.
Find opportunities like Nick’s at viawny.org/work-here.
Learn more about VIA’s workforce development programs at viawny.org/services/workforce/.