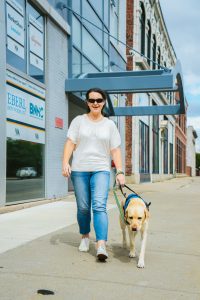 From confidence to diagnosis

After many years of figure skating and prepping to be a doctor, Erica Rodman was diagnosed with mitochondrial disease. Her diagnoses not only impacted Erica’s overall health conditions but majorly impacted her vision, causing her to become legally blind.

“My whole life was turned upside down,” Erica said. “Before this, I could drive, I was a figure skater, I worked, I was prepping for medical school. I was your typical college student. All of a sudden, I had difficulty walking, and my balance and vision were almost gone. I lost a lot of independence over the years.”

Before she ended up getting connected with VIA, Erica tried to get services through other programs in the state. After years of turnaround and confusion, she finally self-referred to the New York State Commission for the Blind (NYSCB). The team at NYSCB gave Erica hope when they not only took her case but referred her to one of VIA’s social workers.

“I was so surprised that [Lauren] had experience working with people who had my disabilities like mitochondrial diseases,” she said. “That was very reassuring, and I was incredibly impressed because of the vision support she had provided and the resources she connected me with.”

Erica said in-general if Lauren had been around to help with her grief and support of diagnosis fifteen years ago, it would have been life-changing. Thanks to VIA, Erica now has the connections she needs to be independent and thrive in Western New York.

Erica is now a frequent attendee to VIA’s support groups. The support group helps Erica not feel isolated and focus on her overall self-care. Erica is also a staple in the group. The staff at VIA are always excited to see Erica and her service dog, Jet, walk through the doors.

“To have people understand you and the roadblocks when working with the system means a lot,” she said. “Not only that, in the support groups, we can focus on the whole person.”

Now, Erica is not only learning how to regain her independence, but she is also thriving in her community. Erica works as a substitute teacher in one of the best school districts of Western New York and is a leading member of Amherst Committee on Disabilities, WNY Mitochondrial Disease Group, and WNY Neurodiversity Group. She has also become an ambassador for those who are visually impaired.